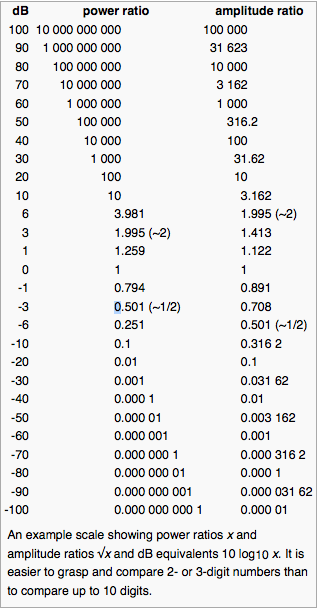 The decibel (dB) is a logarithmic unit used to express the ratio between two values of a physical quantity, often power or intensity. One of these quantities is often a reference value, and in this case the decibel can be used to express the absolute level of the physical quantity. The number of decibels is ten times the logarithm to base 10 of the ratio of the two power quantities.[1] One decibel is one tenth of one bel. The bel is named in honor of Alexander Graham Bell, but is seldom used.

The definition of the decibel is based on the measurement practices in telephony of the early 20th century in the Bell System in the United States. Today, the unit is used for a wide variety of measurements in science and engineering, most prominently in acoustics, electronics, and control theory. In electronics, the gains of amplifiers, attenuation of signals, and signal-to-noise ratios are often expressed in decibels. The decibel confers a number of advantages, such as the ability to conveniently represent very large or small numbers, and the ability to carry out multiplication of ratios by simple addition and subtraction.

The decibel symbol is often qualified with a suffix that indicates which reference quantity has been used or some other property of the quantity being measured. For example, dBm indicates a reference level of one milliwatt, while dBu is referenced to approximately 0.775 volts RMS.[2]

The definitions of the decibel and bel use base 10 logarithms. The neper, an alternative logarithmic ratio unit sometimes used, uses the natural logarithm (base e).[3]

According to Mitschke,[20] “The advantage of using a logarithmic measure is that in a transmission chain, there are many elements concatenated, and each has its own gain or attenuation. To obtain the total, addition of decibel values is much more convenient than multiplication of the individual factors.”
The human perception of the intensity of, for example, sound or light, is more nearly linearly related to the logarithm of intensity than to the intensity itself, per the Weber–Fechner law, so the dB scale can be useful to describe perceptual levels or level differences.[citation needed]

According to several articles published in Electrical Engineering[21] and the Journal of the Acoustical Society of America,[22][23][24] the decibel suffers from the following disadvantages:

The decibel creates confusion.
The logarithmic form obscures reasoning.
Decibels are more related to the era of slide rules than that of modern digital processing.
Decibels are cumbersome and difficult to interpret.

Hickling concludes “Decibels are a useless affectation, which is impeding the development of noise control as an engineering discipline”.[23]

Another disadvantage is that quantities in decibels are not necessarily additive,[25][26] thus being “of unacceptable form for use in dimensional analysis”.[27]