On a large and complicated system, it’s very important to collect as much information about all the various speakers / processing nodes / etc… as possible prior to starting the optimization process. Coming into a system that isn’t right means that you’re gonna run into all sorts of things that are either incorrect or need to be figured out and then addressed.

Here are some things we didn’t know prior to starting the process that should be discovered in advance.

All makes and models of speakers in system.
Complete understanding of how DSP is configured (inputs to outputs)
Manuals for all the devices in the chain so you can reference them for answers when needed
Verify that all the various speakers are working (zone by zone) & if not, know what is wrong
Understand how the signal chain works so you know how every passive speaker is fed from which amp
Understand your signal chain between console, DSP and any self powered speakers

If you have someone come in to tune & optimize your system and you don’t have this knowledge, instead of optimizing your system you’re going to need to gather the information anyway. In some cases, you may not get to the actual work you wanted to do. I would suggest that you spend a few days prior to any tuning / optimization visit by someone gathering every shred of information you can about your system.

So let’s assume that you have done all your homework before the time is set to measure / tune / optimize your PA.

Here is a drawing that Dave Lawler made for the local crew to setup his mics the way he wanted them. 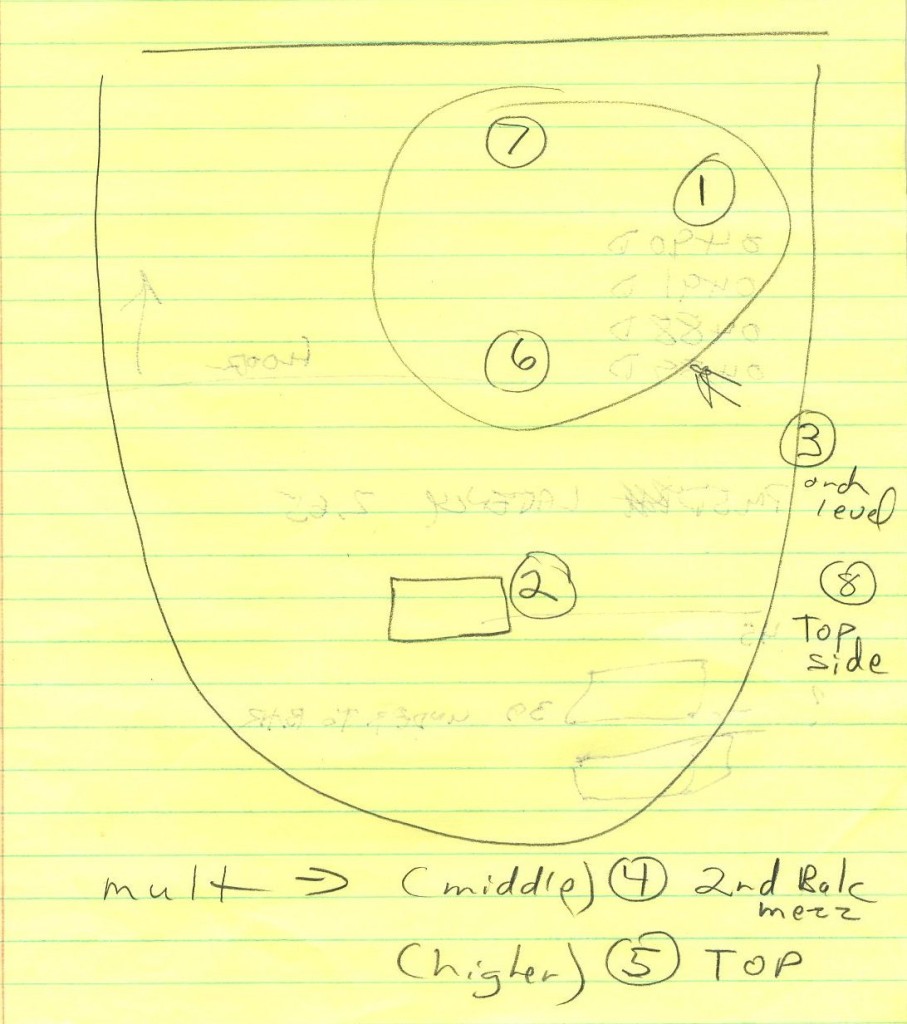 (8) mics are shown. We never got to using all (8) mics because we ran out of time and so many other things needed addressing. Instead we used the (6) Josephson C-555 mics Dave brought with him and moved them around. It’s really important to label the mics and the snakes and cables you use for each mic so that when you need to reference different mic positions you can know with certainty that you’re measuring with the correct mic.

Dave is a Meyer SIM3 user and brought his SIM3 rig. When we opened up the case, the power button was stuck and the rack ear was bent. Obviously the case took a hit at some point between giving it to TSA and getting it back. We had to pry the power button out to get the device to power on and stay on. 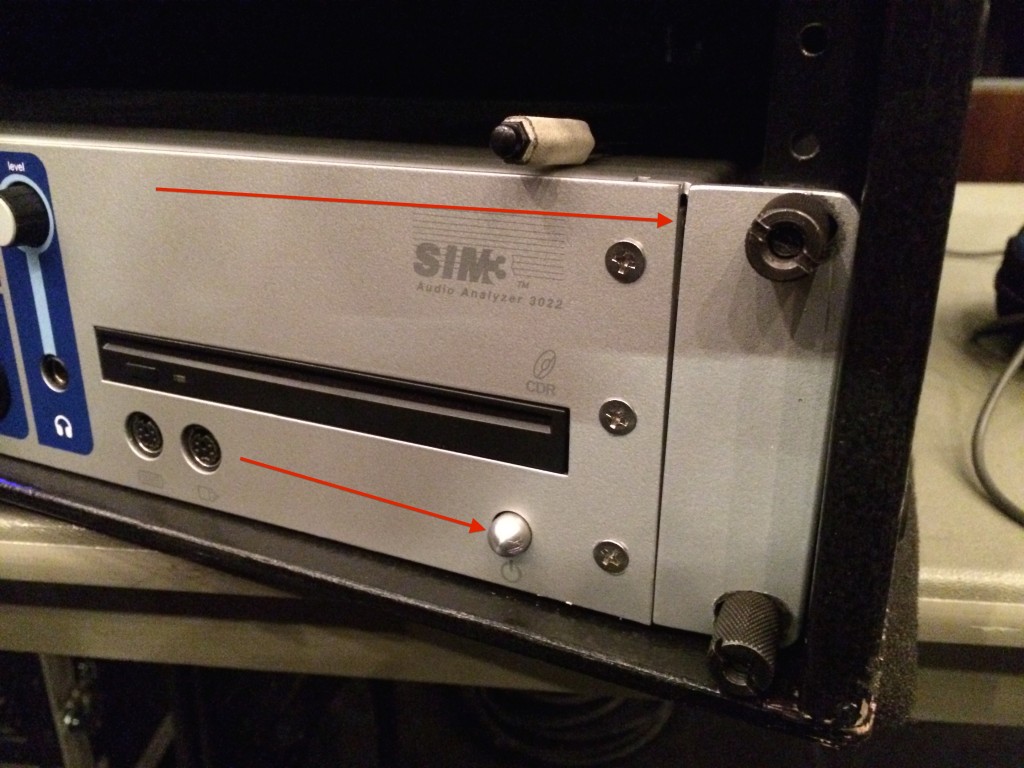 So what did we do?

The biggest task was to tackle the house L/R line arrays which weren’t hitting the front rows or the upper balcony. I contacted Renkus Heinz so we could verify the settings in the RHAON software (allows for DSP at each speaker box). In that process we were given the following factory settings for Renkus Heinz VLX3 box.

Along the way of verifying that the settings per box were all set up correctly on the main RH line arrays, Dave discovered that some of the boxes were delayed incorrectly and others weren’t. This isn’t a good thing. Getting a single VLX3 box setup correctly was a task in and of itself but then getting all 24 boxes setup correctly was another task.

Once we had appropriate house staff in place, the main line arrays were dropped and the angles were adjusted to attempt to reach the upper balc without losing any coverage down front. This required changing the support point which mean that the entire array had to be disconnected from the support structure. Since a 12 box array weighs more than 2000 pounds, we removed all but 4 cabinets. Once we had the angles set as per Dave’s model, we began to add cabinets back until we had a complete array again.

The end result is and array that curves up at the top and down at the bottom where as before the array was more like a J which left the upper balcony poorly covered. 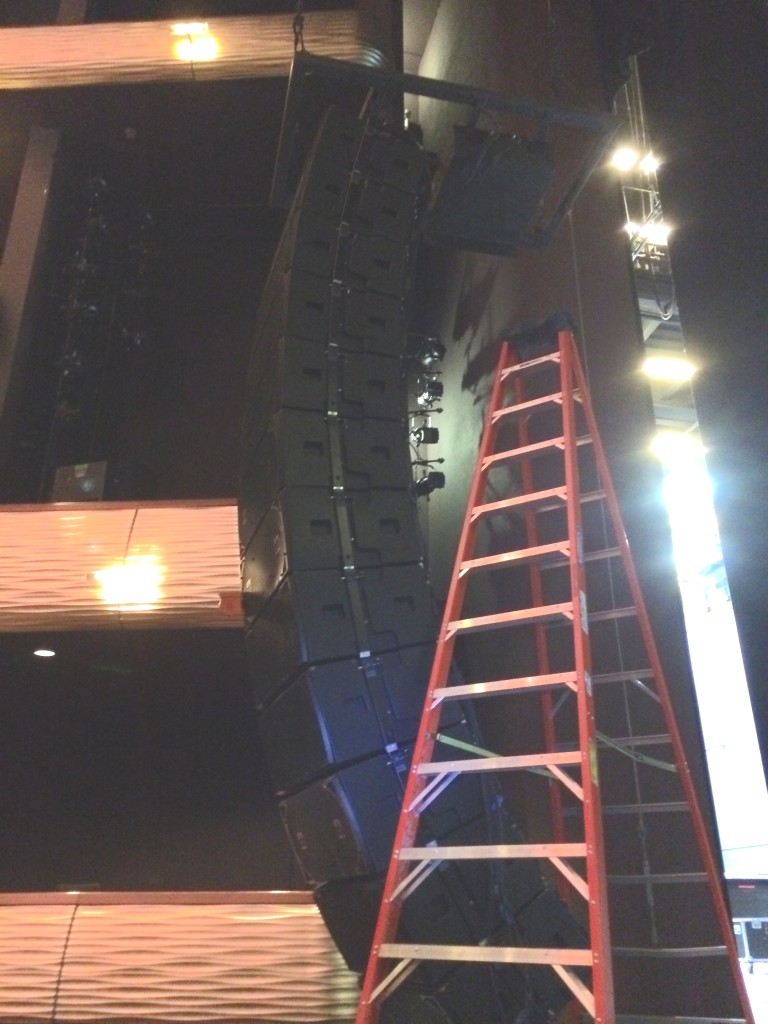 Once the main arrays were rehung and tuned, Dave tackled the front fill speakers and the upper balcony fills which cover the last (4) rows of seats. 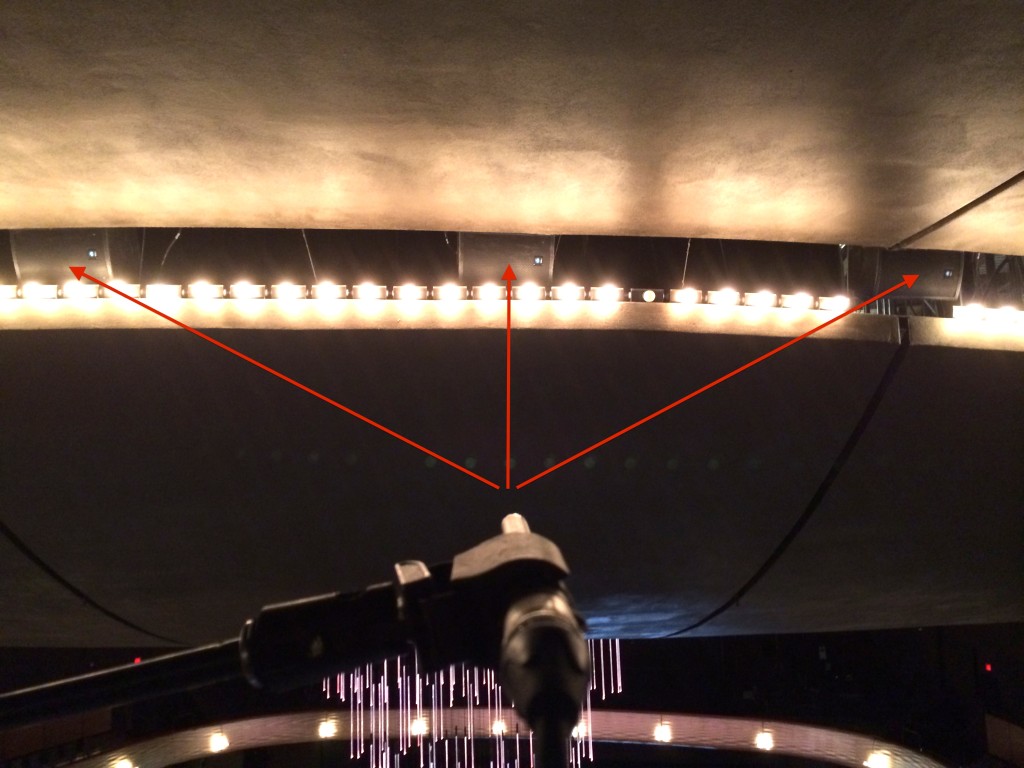 Tomorrow I’m scheduled to assist Meyer SIM 3 operator and sound system design and optimization engineer Dave Lawler with some optimization plans for the Winspear Opera House. Dave designed and installed the current Meyer sound system @ Bass Hall in Fort Worth. He was also the FOH engineer for Diane Krall for over a decade. I wasn’t available to participate very much with the Bass Hall measurement process so I’m looking forward to this project.

I’ll post through out the process and hopefully be able to share some useful information once the project is complete. The plan is to reaim the main Renkus Heinz line arrays, re delay and eq all the system parts and solve any issues where possible without adding speakers. This process will reveal any need for future adjustments.

On my last measurement session, after setting some delay times, I visited the mic location and realized that the boom had fallen down and the mic was near the floor and not aimed at any speakers anymore.

Obviously the results you get down between a seats and not on axis of the speakers being measured is a bad thing. You may be able to tell in the picture that the rubber washer at the boom arm base is bulging. From now on, I’ll make sure the boom is tight. If it can’t be made tight, I’ll change out stands. Obviously your measurement mic might suffer damage if the mic bangs into something.

As a side note, any windscreen affects the response of a mic @ high frequencies. Unless there is a reason to use one (like you’re outdoors), don’t. In this case, my assistant put it on and I didn’t know it.

This is what I was getting when there were (3) producing the same pink noise.

When you’re measuring something, always make sure you’re measuring what you want to be measuring or your results are of no value. Your IR (impulse response) window is your first line of defense against false measurements since in order to have useful phase information displayed you have to calculate your delay at the beginning of the measurement process. If you change your mic placement, your delay time changes and will need to be recalculated. If you’re using Smaart 7’s LIVE IR tool, your impulse response information is updated in real time as you move the mic.

I’m about to finish a production run of an old classic ballet called “Merry Widow” which premiered in 1975. It’s a fun show and beautiful to watch. Enough about the ballet though.

A few audio facts right off the bat here.

The only playback involved (besides rehearsal music) are some glass breaking cues when the dancers toss their champagne glass offstage that I recorded in a warehouse. The production benefits from having an orchestra in the pit. The house PA system is severe overkill for a production like this but there is still a need for a well thought out small PA to cover announcement duties, provide broken glass sound to the majority of the house and to provide a touch of orchestra enhancement for seats not near the pit.

In order to make sure those near the front of the theater (nearest the stage) have a quality experience, I located a “practical” speaker offstage near where the champagne glasses are supposed to be crashing. For those who are further out in the venue, the “practical” won’t translate correctly so I’ve also added a bit of the same glass breaking sound to the house left speakers being careful to avoid having too much in the house. House audio engineer Doug Kirk, IA sound engineer Paul Strong & myself spent a good deal of time balancing out the glass sounds between the practical and the house left PA to make sure everyone could still believe the glasses were actually breaking offstage.

Speaking of the house PA, I have been flying (4) QSC KW122 speakers. (2) per side as lower and upper pairs. The upper pair is meant to provide coverage to the upper balconies. The lower pair covers from the pit edge and up to about the 4th level balcony. Realistically there is probably too much overlap but if I splay things out vertically any more, I will either wash the pit or wash the ceiling. The first time I tried this PA concept I flew (3) pairs as lower, middle, high but it was obvious that the middle pair wasn’t needed and only made things worse.

This time around I considered whether only (1) pair can cover the entire venue but decided that while it may work, it doesn’t allow for any error or flexibility. For instance, if the upper balc needs more volume, there is no way to provide it. Logically if the far balcony is twice as far away from the pit as the orchestra seating, in order to maintain a consistent level, the upper pair of speakers needs to be louder.

The seats closest to the pit are getting direct orchestra sound. As you move back in the house on the orchestra level, you lose direct view of the orchestra and so you lose direct sound. Consequently as you move away from the pit, the high frequencies are blocked by the pit wall and so we need to add some sizzle back to the orchestra. This is accomplished by micing the orchestra which is primarily done to provide fold back (stage monitors) for the dancers. Those same mics are used to enhance what is missing. Not to make things louder but to make things intelligible. As you move upward in the venue, you begin to see the entire orchestra again at which time you don’t need the same enhancement as you do on the orchestra level. Now the issue is the matter of balance between the brass and percussion sections and the wood and string sections. When the brass and percussion are playing loudly there is no chance the woodwind and string players can compete and they are buried. The upper speaker pair needs to avoid adding any brass or percussion but enhance the strings and woodwinds a bit.

So we’re stuck using (2) pairs of speakers doing different things but overlapping a bit somewhere between the 2nd level box seats and the 4th level balc.