My typical measurement rig consists of (2) Earthworks TC40K (a matched pair), my Mac laptop and a Metric Halo 2882 audio interface. Software could be either SpectraFoo Complete or Smaart 7.

On a recent gig, I put out the two mics. One about 1/3 of the way back in the house from the HL line array. I put the second mic near the FOH position to get an idea of how I would need to mix and to see how different those two positions were. I adjusted the gain on both mics to match which I realize now isn’t always the right choice. If a mic is close to a speaker and you move the mic back, you would expect to see a drop in overall level as you move further and further away from the speaker. So what? This decrease in level tells us the decrease in level between those two points. Where before I had a gain setting of 35 on the close mic, I had a gain setting of 40 on the second mic. 40 minus 35 = 5 db of SPL between the first mic and the second mic. While matching the gain of the mics allows to see the traces overlap for comparison, knowing how much the SPL drops off by the time you’re standing at FOH is equally important. 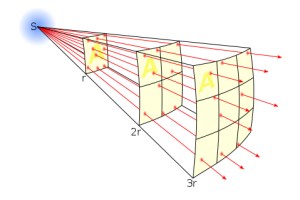 QUOTE:”In physics, an inverse-square law is any physical law stating that a specified physical quantity or intensity is inversely proportional to the square of the distance from the source of that physical quantity.”

In sound terms, this means that each time to double the distance away from the source, you 1/2 the volume. Moving from being located 1 foot away from the speaker to to 2 feet is 1/2 as loud. Moving from 2 feet away to 4 feet is 1/2 as loud again, etc… This doesn’t work exactly like this in reality because some frequencies are supported by near boundaries while other frequencies are not. So the drop in SPL with the doubling of distance is frequency dependent. Indoors, you can expect the low end to drop off slower than the mid / high frequencies.

This is why it’s better to use more speakers instead of one set of huge speakers unless you can fly them high enough to even out the distance between those up close and those far away. This is where delay rings come in.

If I were to make the same measurements again, I would make the gain for both mics equal which would reveal how much sound is being lossed by the time it arrives at FOH (back corner / under a balcony / etc…)