Over the last few weeks I have been getting acquainted with my new Lectrosonics measurement gear which consists of:
(1) Venue 2 – (6) channel wide band receiver
(1) R400a – (1) channel narrow band receiver
(2) HMa – (1) channel wide band plugon transmitter
I purchased the (6) channel Venue 2 receiver (A1 band) in order to build a multi channel measurement rig. I purchased the single channel R400a receiver (block 19) so that I can travel with a single channel of measurement kit when necessary. The HMa plugon transmitters will work with either the Venue 2 or R400a receiver since the A1 (wideband) transmitter covers block 19 (narrow band). Now I just need more HMa transmitters 🙂 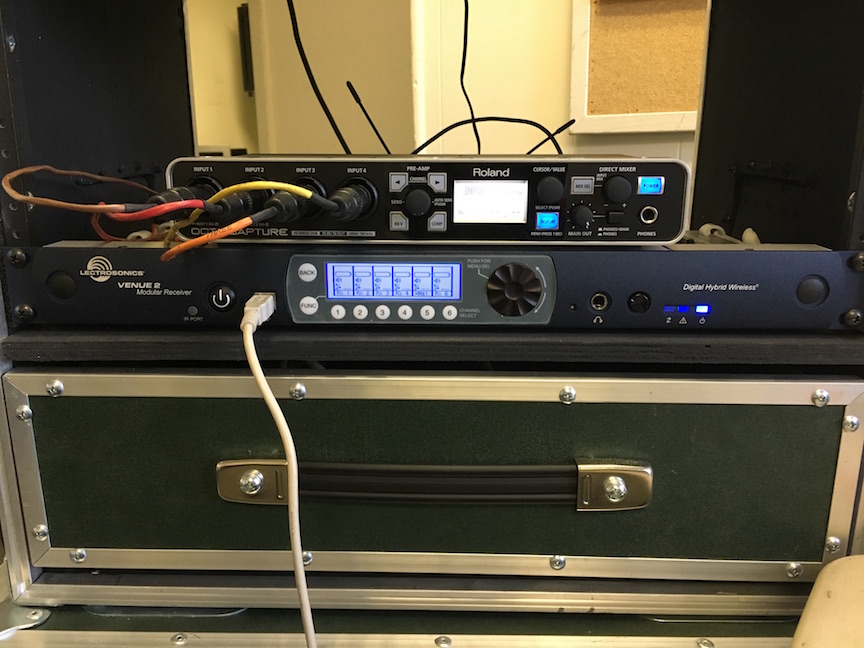 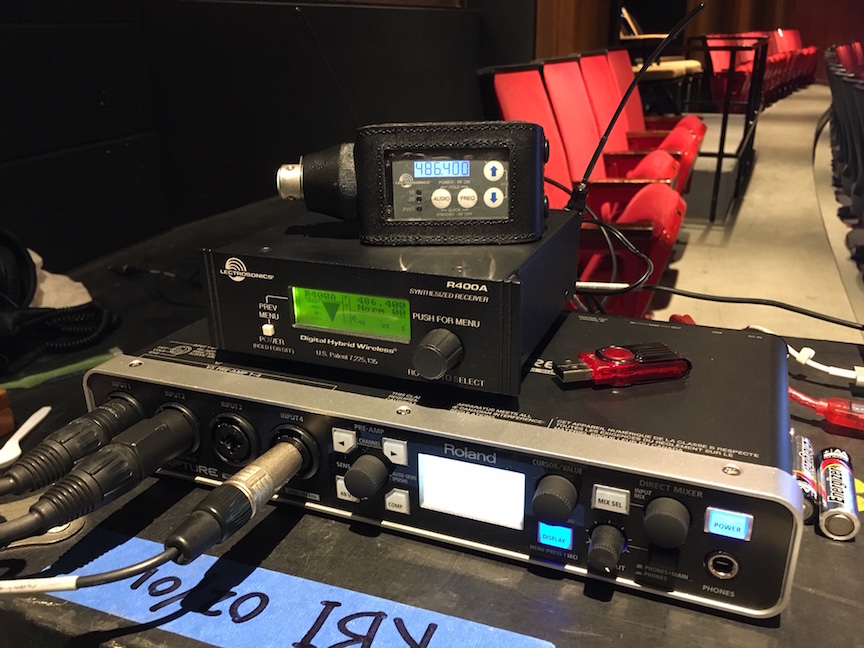 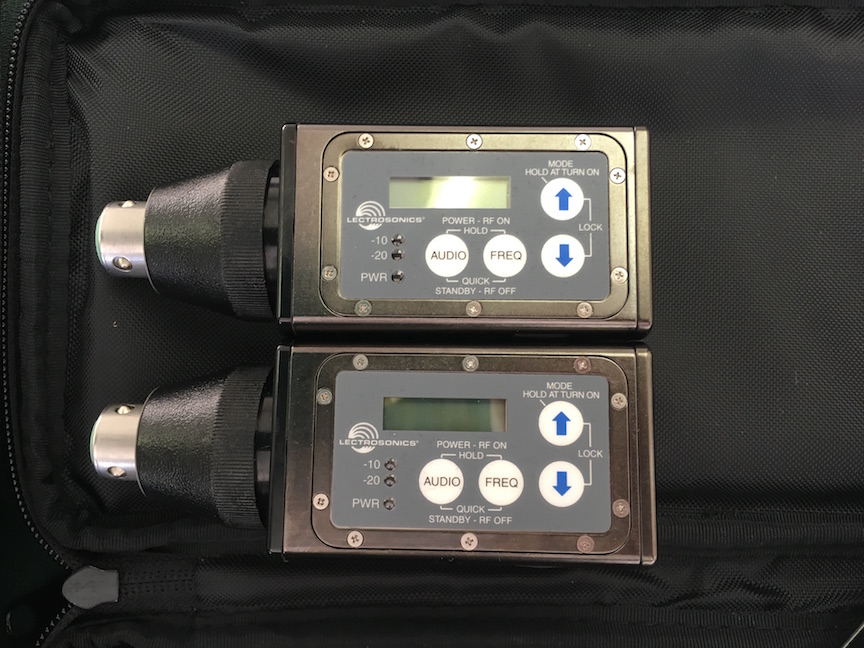 A few notes regarding using Lectrosonics digital hybrid gear for measurement purposes.The system has an inherent latency of approximately 3 ms compared with a cable. Just something to be aware of. 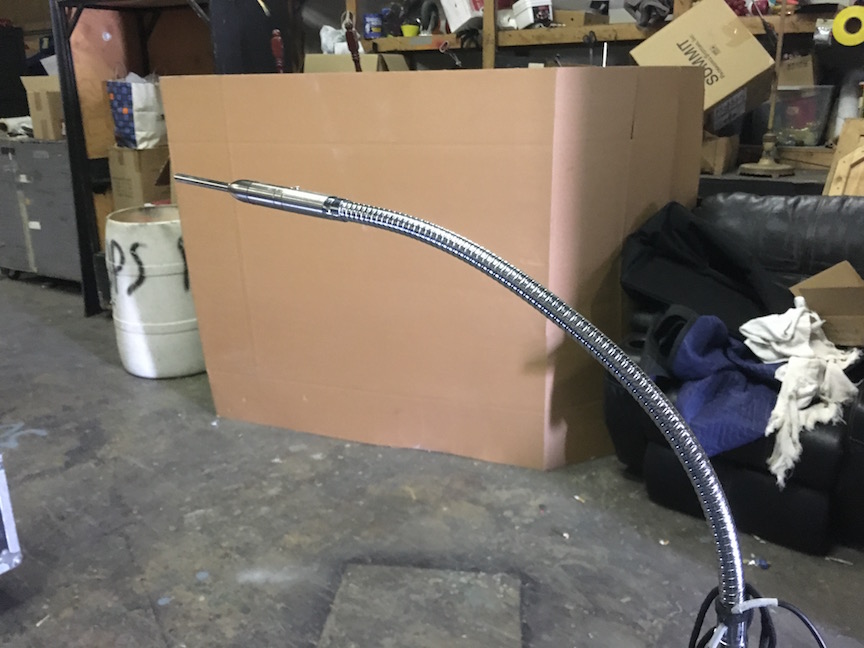 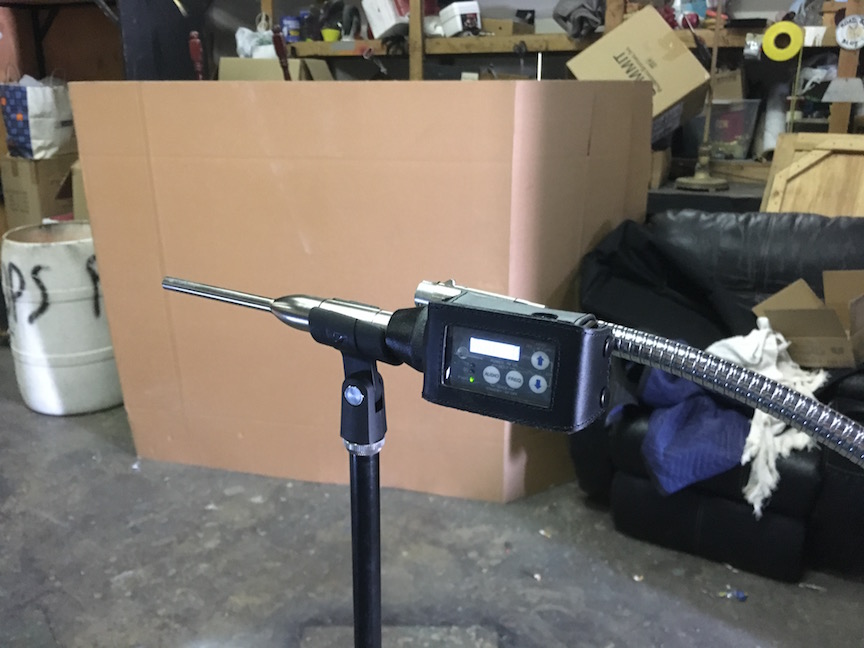 The Lectrosonics digital hybrid receivers have a high frequency noise reduction function that is set to NORMAL at the factory. It should be set to OFF for measurement purposes or your measurement results will be tainted at frequencies above 2k. The following image illustrates how the high frequency response of the system is affected by the 3 different noise reductions settings when measuring “pink noise”. Note that the NR setting should be restored to either NORMAL or FULL (depending on the circumstances) for non measurement purposes. The procedure for making these adjustments can be reviewed in the user manuals: 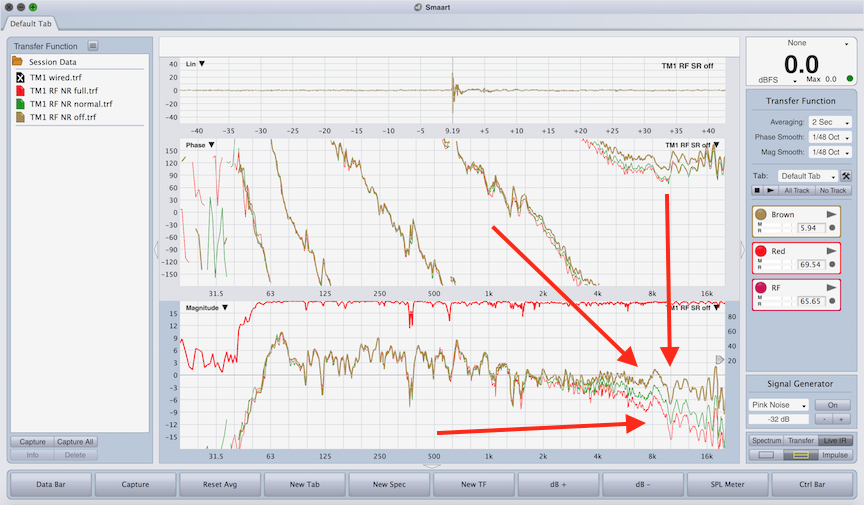 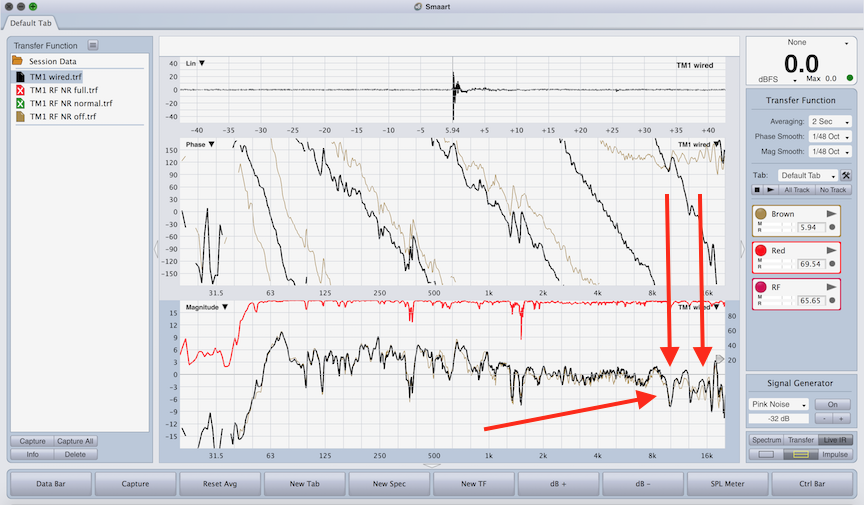 The HM & HMa plugon transmitters have an adjustable high pass filter labeled as “LF” that should be set to 35Hz (the lowest setting available). Other setting include 50Hz, 70Hz & 100Hz which would be useful when using the plugon transmitter with a handheld cardioid mic.
HMa transmitter user manual PDF – page 10 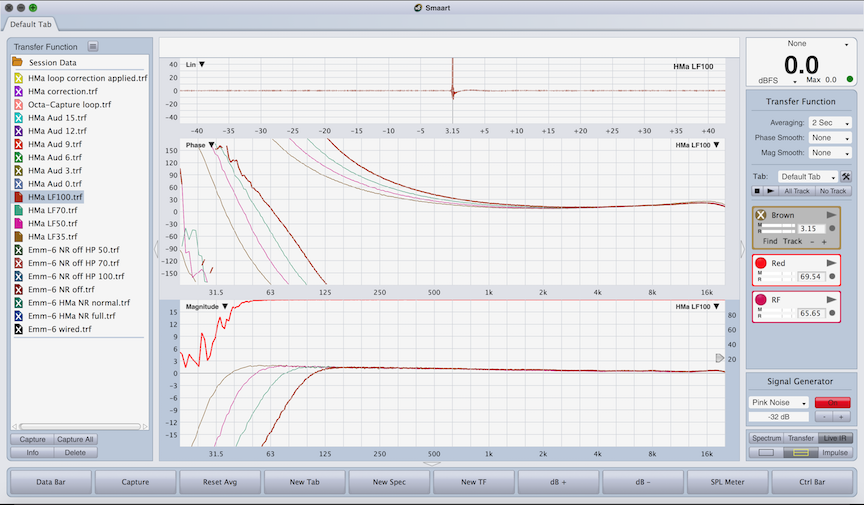 I have been involved with various measurement projects that took advantage of other people’s Lectrosonics RF gear and while I was very impressed, I wasn’t able to afford the gear until now. Having used the single channel HMa TX / R400a RX kit on a recent travel gig, I can undoubtedly state that having the ability to measure without dragging mic cables around the venue and risking mic damage due to a snagged cable is a game changer. The cost of the gear itself, the cost of batteries and having to manage batteries during each measurement process are considerations. On the flip side of the coin, the amount of possible time savings is no trivial matter. T=M (time = money) & there is never enough time to measure. Wireless measurement gear is an investment in your end result. I also purchased (2) Lectrosonics handheld transmitters and (2) Lectrosonics beltpack transmitters so that once I’d done with the measurement process, I can use the same receivers with different transmitters for production work. 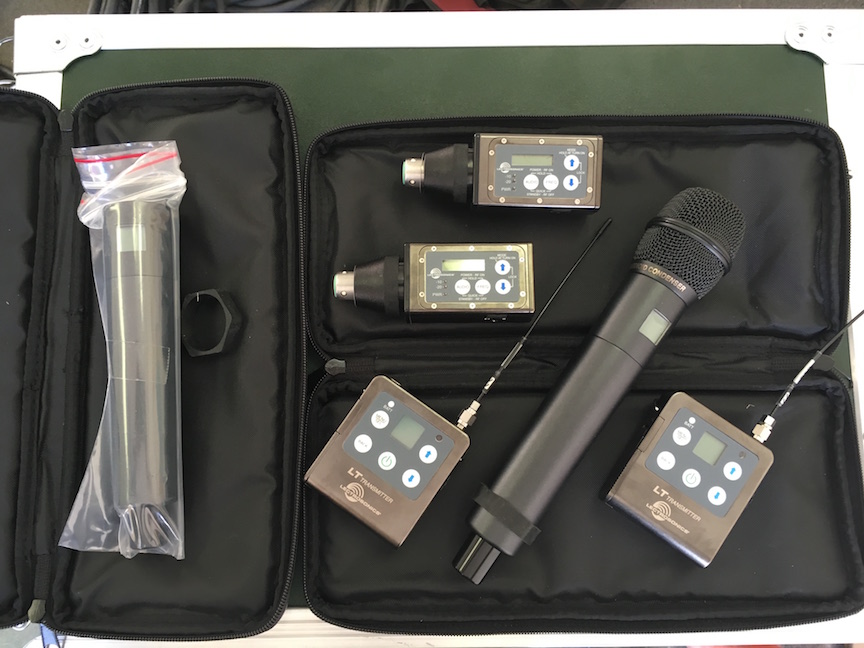 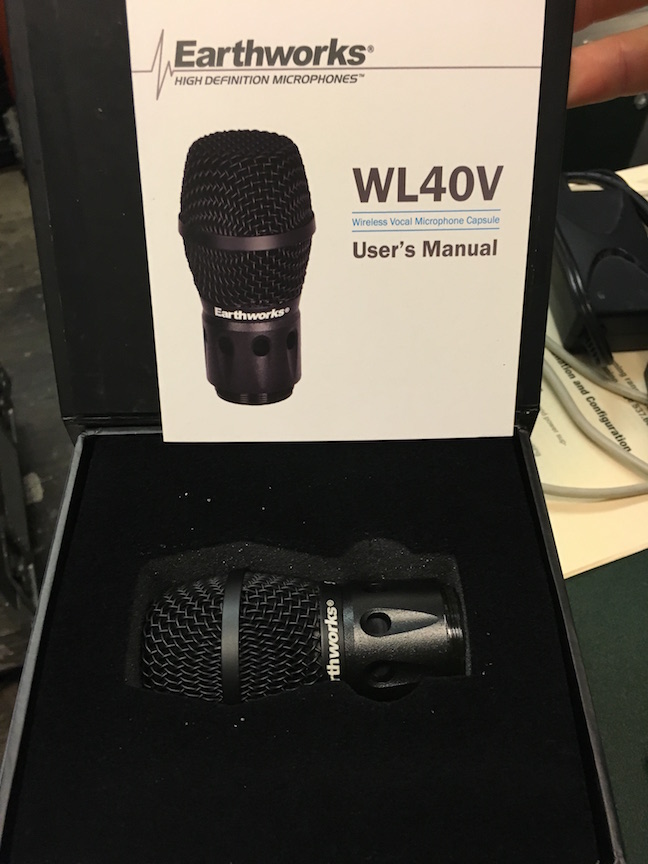 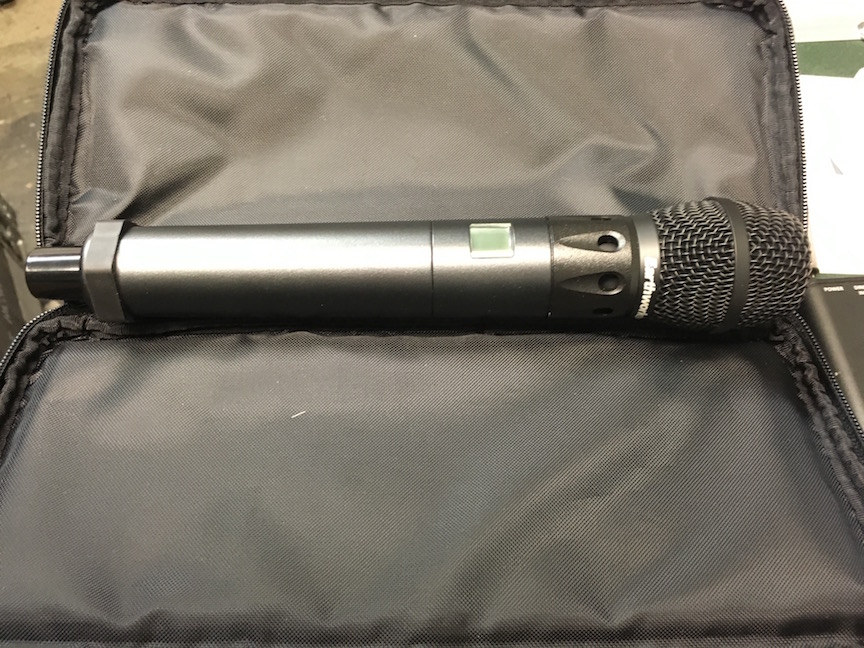 One of the nice things about the HMa plugon transmitters is that they can be used as a handheld transmitter once you swap out the omni measurement mic for a cardioid dynamic or condenser mic. Certainly won’t roll off the table! 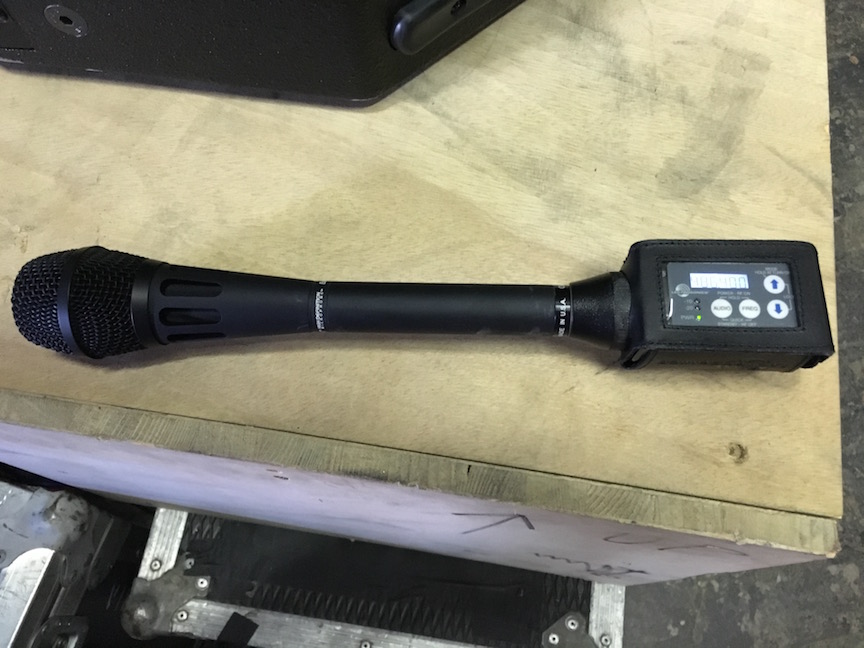