ARthur Skudra is a Rational Acoustics Smaart instructor among other things:

Based on multiple posts to the Rational Acoustics forum Arthur has made on the subject of using Line 6 wireless gear for audio measurement purposes, I emailed him a few days ago to ask him what his current thoughts were. Come to find out he likely has the largest Line 6 measurement rig in the world at 5+ channels. At this point using Line 6 wireless gear for audio measurements is a departure from the industry standard “tried and true” Lectrosonics gear and doing so requires a bit of courage & experimentation to get it all to work. His response was both quick and lengthy, providing all the details one could hope for. I would share the information here and now but Arthur stated that he’s working on an official document on the subject so I’ll let him get that all done and then provide access to that information. In the meantime the good news is that it works (given the right gear and configuration). More soon…

Many times I come across PA systems that have potential that was never achieved because it was installed wrong or not tuned correctly (or at all).

It’s refreshing to find an outfit that recognizes this issue and has made it a business model to see if they can optimize your system AS IS before they write up a quote to replace everything (the norm).

Their slogan – “Optimization before Replacement”! What a novel idea…

This article is worth reading in order to understand the difference between Q and bandwidth when it comes to filter width.

rane.com – Bandwidth in Octaves Versus Q in Bandpass filters

Here is a PDF of the same information:

Rane – Bandwidth in Octaves Versus Q in Bandpass filters PDF

Here is a screen shot of the Rane table for those who want something portable:

Having recently worked with Sound Mirror (a classical recording firm) on an opera production and then installing a new sound system at the Indianapolis Zoo, both using Lectrosonics wireless gear, I wrote the company to ask how I might build a multi channel
measurement rig. Below are the answers I received from John Muldrow @ Lectrosonics. Note that I use Earthworks measurement mics so the list includes the adapter needed to have those work with the HM plugin transmitter.

This is a list of the gear needed which uses the 1RU Venue receiver frame:

We would recommend block 470, block 19 or block 20. The lower blocks work well around the country so you shouldn’t have too many problems.

One could also purchase (5) of the Lectrosonic TM400 measurement kits.

The up side of using the TM400 kits is that you can take as few or as many as you need and each one is discrete. I like the idea of a single rack space receiver and then (5) HM plugin transmitters. Everything could store in a rack drawer including the antennas.

Before you run out and spend the money, consider this. Lectrosonics will be releasing a new hardware series soon (around end of 2015) which might have benefits that we would want. Here are the specifics to built a rig using that gear once it’s available:

Equipment for Venue2 would be:

The Venue2 and VRT2 modules will start shipping in December.

HMA will possibly star shipping in December as well hopefully.

Bob McCarthy explains in his workshop that (5) mics are a minimum to measure a system efficiently. Based on my research on line, street price for a (5) channel Lectrosonics measurement rig based around the Venue / VRS / HM plugin transmitter is around $10,000 not including the mics. Street price for (5) Earthworks M23 measurement mics is in the $2500 ballpark. So for around $12,500 you could join the RF measurement club!

Hopefully Ole Saint Nick will be generous this year to all of us!!!

The loudspeaker manufacturing industry uses a term that is misleading to describe how a speaker behaves.

That term is “COVERAGE ANGLE”.

Anyone who knows how a loudspeaker works can tell you that there is no such thing as a consistent coverage angle for a speaker. The relevant question is “at what frequency?” Otherwise there is no reference point and no useful data to act upon.

Nathan Lively & Daniel Lundberg have provided us with the following:

The announcement for this plugin just landed in my email box. 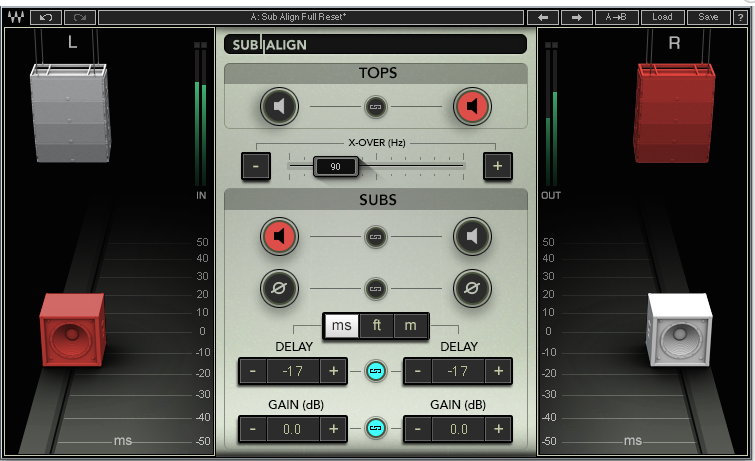 Here is a video that explains how the plugin is used:

Sub Align is a must-have survival tool for any live sound engineer. This plugin lets FOH engineers align sub and top speakers in PA systems where the subs are tied in with the tops, and the system processor is inaccessible. By doing so, Sub Align offers a revolutionary solution to a problem live sound engineers have been struggling with on a daily basis.

The Problem
The physical position of tops and subs and the distance between them are critical for the overall punch and clarity of the PA system. However, most performers and engineers play small and mid-sized venues, where very often the tops and the subs are not properly aligned. In order to clear floor space, the subs are usually stacked at the sides of the venue or all the way in the back, causing the sound to be smeared and unfocused. To make things worse, the system processor is seldom accessible to the live sound engineer, and the PA subs are tied in with the tops.

The Solution
Sub Align puts YOU in charge of the venue’s PA sound with a simple and original solution: by giving you control over the delay between your tops and subs and creating a crossover point between them, it enables you to “move” your subs back or forward in relation to the tops, until you reach the alignment point that sounds best to your ears. No longer do you have to waste precious time fighting unaligned PA systems with EQs and compressors. To achieve extra clarity and punch, Sub Align also gives you control over the subs’ volume and polarity/phase.

Take Control
Don’t let badly aligned PA systems dictate how your mix will sound! Sub Align puts the control in your hands, enabling you to get a clearer, punchier mix no matter what venue you’re mixing in.

On a recent measurement session taht involved salt water, it was decided to use a Rational Acoustic RTA-420 mic instead of the more expensive DPA4007. Rational Acoustics sells a verion of the RTA-420 mic that comes with a calibration file to load into Smaart. Once done, an RTA-420 provides results as if the mic were perfectly flat.

The RTA-420 mic we had didn’t include a calibration file. How would we calibrate the mic against the DPA4007?

For anyone considering or who already owns a Lectrosonics TM400 measurement kit, it might be worth reading this:

I just got back from a quick trip to the Indianapolis Zoo to help with some sound system upgrades and to add a video screen and projector.

The sound system consists of the existing EV cabinets that were previously installed by another vendor. We added front fills and delay speakers to cover all the seating.

I’ll add specifics later but in essence we had (4) piece to put together.

There are (4) QSC speaker on each side of the Dolphin pool separated by the slide out for a total of (8) front fills fed as two zone via 70v amp.

There are (8) QSC speakers near the ceiling covering the highest 5 rows of seats. (2) zones.

We discovered that the EV speakers were NOT EQ via the EV DX-38 DSP unit. All EQ on the existing system was bypassed. Just by tuning the existing system, the venue was upgraded to useful status. The EV cabinets used for mains were not able to cover enough territory by themselves but with the addition of front fills and delays, the current system is surprisingly good.

We equalized the front fills & delays using the built in DSP on the QSC CDX 4.3 amp.